I've been eating out a little more than I should lately, mostly out of laziness about cooking at home.  I decided to focus on my cooking skills this evening to unwind from a long day at work, since that third class of the day makes me want to bang all of my students' heads on their desks.  (Is there some device that expedites this process for the busy professor?)  Anyway, I had bought some chicken breasts, and I've recreated my usual kitchen-sink-style spice cabinet in my new place, so that seemed the thing to work on.

The last time I cooked chicken breasts, I tried for a nice soy-lime marinade, and only half-succeeded: too salty, too acidic, and not enough depth of flavor.  I was puzzling over what else I could add to dilute the negative qualities of the soy sauce and the lime juice, and after a while a brilliant idea struck me: WHISKEY.  A few internet searches later, I had an idea what I would do.  And, I am pleased to announce, my latest improvisatory recipe was wildly successful!

Mix the green onions, garlic, spices, lime juice, soy sauce, and whiskey together in a bowl wide enough to marinate all the chicken at once.  Trim the fat and gristle from the chicken and marinate it for at least an hour, turning it over halfway through.  After marination, cook it in a big frying pan with a lid, along with the spinach.  Once everything is laid out in the pan, cover it and check it every five minutes or so.  You want all the veggies and chicken to steam a bit more than they fry, so the moisture isn't all boiled off.  Thick pieces of chicken, like split breasts, may take about half an hour of this, being turned over now and then, before they're cooked all the way through.

Serve with either a glass of the same whiskey used in the marinade, or a red wine light enough to let you savor the delicate balance of the marinade/glaze. 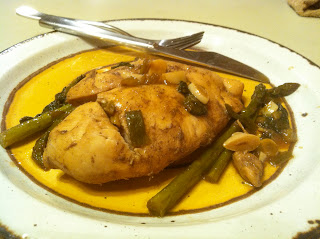 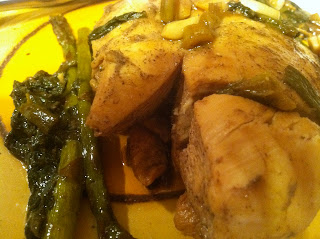