After wrestling with my feelings about current events in Research Country for several days during which I wrote little, I busted out almost 1000 words this evening.  How did I do it?

The Dark Side of the Force.  I allowed my burgeoning anger and dismay guide me for a bit, rather than more dispassionate, academic feelings.  As Palpatine once remarked, anger and fear can make you stronger.  I mean, yeah, for a little while, and then eventually you'll be overthrown by a bunch of teenagers driving an aluminum falcon, but for a few moments here and there, it proves useful.

The trick, I think (and hope), is to rein myself in before my particular perspective on events turns into a sheer ranty op-ed.  So far, I believe I have pulled that off, but it will be interesting to see what I write over the next few days as I try to reconcile all of this stuff with my pseudological analysis of all the Damn Lies I've been working on for years.

And yes, this post was about 50% an excuse to post a link to a funny video.  Got a problem with that?
Posted by Dr. Koshary at 11:03 PM No comments:

I'm crowd-sourcing this topic to get a survey of opinions: I'm toying with the idea of becoming a premium reader subscribing to Scribd so I can access some wonky policy papers and some medieval texts that are hard to find in print form.  (I pride myself on my catholic tastes.)  But so far, there is exactly one of each on my to-read list, and I'm not sure how much else of value to me will be on there.  I don't mind paying money for something useful, especially since some colleagues and I have just been griping about the library holdings at CBU.*  But I'd feel like a sucker paying any level of subscription fee to download two documents – although one of them is/was a full-on codex – and then find that the rest of the field is some idiot's self-published vampire novels and a bunch of dimestore romances gone digital.**

Has anyone out there in the blogosphere used Scribd's subscription service to fruitful scholarly effect?  Even if it's really only good (in my eyes) for medieval texts in RCish that went out of print 500 years ago or are simply impossible to acquire in the U.S., that would probably be worth a month's subscription to me so I could hunt them out.  And if I could look forward to downloading government and think tank papers that barely exist on actual paper, I'd be willing to do long-term.  I just don't want to throw away my money and, maybe more importantly, my research time on a wild goose chase.

* The library isn't really bad, but it isn't research-quality, either.  This goes toward a much longer post about CBU's priorities in word and in deed, but that's another cup of coffee.
** Wonder what I'm talking about?  Check out the home page.  It's not promising.
Posted by Dr. Koshary at 11:18 PM 2 comments:

Clearly, I need to bone up on magic and ritual surrounding the craft of writing on deadline.  I made the mistake on Friday, after a good writing day, of ordering myself to push ahead to a total word count of 75000 by the end of the weekend.

I then proceeded not to get there until right now.  Sheesh.  Do I need to consult a shaman about this stuff?  Or do I just need to stop setting myself intermediate word count goals when I have a bright-line final deadline anyway?

What jinxes your attempts to write toward a goal?  What counter-hexes protect you?  Share your sorcery, please!
Posted by Dr. Koshary at 4:17 PM 2 comments:

The Big Giant Pseudology organization has started listing job postings for this upcoming year's market cycle.  I already have four of them earmarked in my spreadsheet and my little file bank.  It has begun.

I'm going to need a stiff drink this evening, once I knock off writing.  :S
Posted by Dr. Koshary at 4:25 PM 2 comments:

My greatest lifehack ever

My lower back has been bothering me lately, and I've noticed more that I slouch in my desk chair in an injurious way when I'm focused on my writing.  I've had the idea in the back of my mind for a while now that I should try a standing desk, particularly since Dr. Becca blogged about building her own makeshift standing desk arrangement in her office.  Now that I'm spending so much time sitting at my desk at home – with my little MacBook, not with the lovely ginormous computer at my office at CBU – my back has begun to revolt.  I nearly had back spasm until I stood up and walked away from the computer for a bit, and that was the tipping point.

I am now standing in comfort, typing this as my computer sits on top of an obnoxiously colored file crate turned upside down.  If laziness and cheapness are our criteria, then I daresay that my solution is even more awesome than Dr. Becca's — if only because it is HOT PINK.  :D 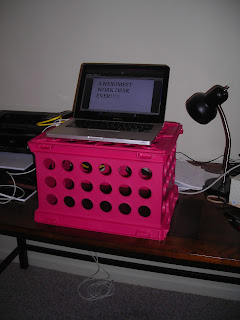 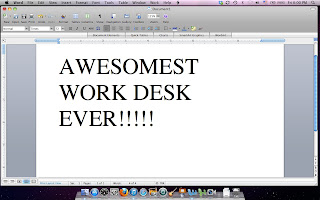 I won't pretend this is noble, but I feel the need to plead with the people of Research Country:

You have no idea the havoc you are wreaking on my linchpin book chapter.  I'm writing as fast as I can, and you are making my life harder by continuing to do stuff.  Could you all just fucking hold still for two more goddamn months?  I mean, don't try to hold your breath or anything crazy like that, but please, please stop doing interesting things for a little while.  Go read a book or do a jigsaw puzzle or something.  Maybe catch up on Breaking Bad, I don't know.  But please, just give it all a rest.  You are wearing me down to the bone.

P.S. Could you please also stop killing each other?  I really feel like you're going to regret that later.
Posted by Dr. Koshary at 11:42 AM 1 comment:

My heart is never cold

It's been a rough week over here at chez Koshary.  Lots of emotional turmoil: not just my usual unbloggable misery – though that was certainly part of the mix – but also some unusual unbloggable misery stemming from the troubling events of late in Research Country.  It's miserable just to recount the general outline of events, so I'm going to skip that.  Suffice it to say that a lot of people I respect (and perhaps a few that I even fear as well) are acting in disrespectful and disrespectable ways toward each other, and I feel the need to keep my head down, lest I get sucked into some absurd argument on Facebook.

But yeah.  This week kind of sucked balls.  And with nearly all my friends out of town right now, I've felt rather alone as I dealt with all the bad shit.

Fuck it.  I need to cheer myself up somehow, so I'm sipping an Aperol spritz made with champagne – okay, fine, método de champaña – that I opened for myself because fuck it, I need a break.  And of course, some great music.  It starts off a little slow, but wait until the second verse begins.  That's when this recording comes into its own.

Editing on the big screen 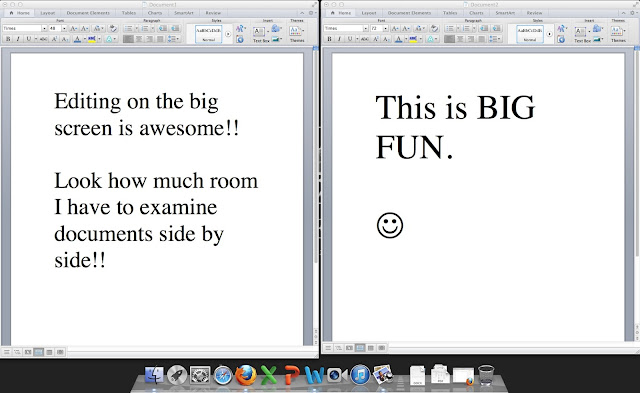 I added about 4000 words to the manuscript today this way.  Gotta do more of this!